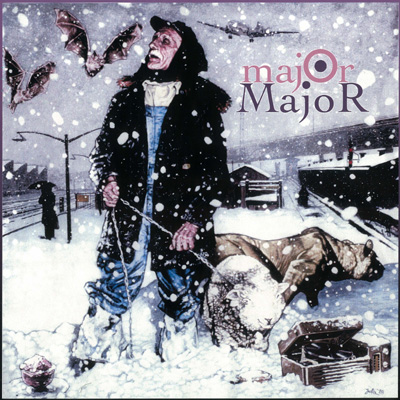 Anthemic bravado sampled with creative melodies define Major Major’s sound—a formula reminiscent of Muse’s lovably unlovable music and Radiohead’s self-loathing. Still, as an indie act that covers thumping beats and striking guitar riffs, it’s an album that will strike a chord with the pop/rock set, despite the minimal variation in terms of theme or mood with each song.

Here and there, the unmistakable twang of synth adds much needed oomph to a song that would have otherwise been underwhelming. And then there is the obvious hint of mariachi influence, whether sampled as is or tweaked to offer a digitized undertone that effectively sets their music apart.

Self titling their first album harks to the band’s grandiose ambitions. And while its subtle electronic elements and heavy percussion and guitar work, the vocals prove itself to be a little underwhelming—swinging from Costello-style samples to Bellamy-level whining. Still, Major Major is a solid, distinct band now armed with a freshman effort that highlights their strengths more than their weaknesses.

Sometimes wailing, occasionally howling, but always aching with a sense of dramatic swagger, Major Major delivers a rock and roll album that pays tribute to their musical inspirations in their own way. Does it lead to a seemingly indecisive sound? Yes—but it doesn’t take anything away from their obvious talent and ear for making rocking hits.

Track list:
1. Gloomy Sunday
2. God Bless the Child
3. Good Morning Heartache
4. Guilty
5. Guilty
6. Here is Tomorrow Again
7. He’s Funny That Way
8. I Can’t Get Started With You
9. I Cover the Waterfront
10. I Got a Right to Sing the Blues