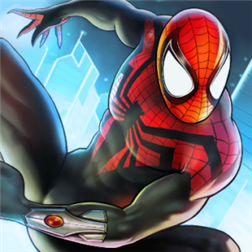 Spider Man Unlimited from Gameloft is an endless runner, but it also incorporates goals and objectives so there’s a lot of variety in the gameplay. The Sinister Six have just opened wormholes and are destroying the city, so Nick Fury has asked Spiderman to take care of the situation.

The wormholes created by the Sinister Six allow numerous variants of the villains to appear from different dimensions, but Shield has done the same. This means you have at your disposal numerous Spider Men, which is great because now you can have him in different costumes.

The game’s story mode will require you to accomplish specific tasks before you can move on to the next stage, The more tasks you accomplish, the more Spider Men you unlock and more levels you can explore. You also gain more abilities as you progress. The nice thing about the game is you have access to a lot of the Spider Men even without resorting to the IAPs.

The game also has an endless runner mode where the goal is to score as many points as possible, and you can also go in event mode and go against other players. Going back to story mode, there are numerous side missions available that can earn you vials, which Spiderman needs for energy.

While there’s a lot to do, the controls are intuitive and the controls are similar to those used in other endless runners. The gameplay is engaging, the graphics are impressive and so is the sound, making this a nice download.