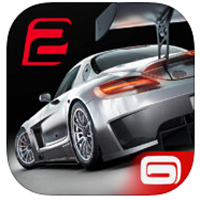 GT Racing 2 from Gameloft promises a real car experience, and it delivers. Some parts of the game will be familiar if you have played other racers, but this game is so polished and well designed it just plays better than the rest. Unlike other racers though, it does a good job with variety so you don’t end up feeling bored.

GT Racing 2 does a superb job of making the features accessible to new players. For those who have played mobile racers before, the game doesn’t feel repetitive or boring, and the tutorial is actually entertaining. There are several control schemes available, and each one works well, and you have steering and braking assistance if you want to use them.

GT Racing 2 has a heads up display with a useful position and lap counter as well as a speedometer, and there’s a mini map too. As you drive, you’ll see a green line, a guideline that tells you what path to take so you can maximize your driving. There is also a campaign mode where you can race in different circuits, many of which need a particular car.

When you win races, you earn gold and stars. Stars will open more circuits, while gold allows you to buy more cars. The nice thing about the game is there are a lot of cars to choose from, including a Lamborghini. If you find yourself lacking speed you can buy a speed boost prior to racing which you can use to get extra acceleration and turning, so there’s plenty here to keep you occupied.