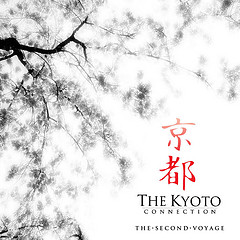 The Kyoto Connection plays chilled out electro-pop mixed with a generous amount of Japanese sounds. Their 2008 release titled The Kyoto Connection II is now free and online. While the Japanese influence was not quite as dominant as I expected it to be, their music is still full of unexpected surprises in the engaging electronic arrangements. I find “Painting With Lights” especially intriguing for its trip-hop vocals and Oriental background drones. “Voyage I – Let The Light In” is the kind of pretty new age track that is both delightful and soothing while “The Prisoner” has a dance-pop quality that is infectious.

All three of the “Voyage” tracks are quite beautiful. I played this at a gathering of people who had very different tastes in music and almost everyone was asking me who it was and where they could get it. This is very engaging music that should be enjoyable to a large audience. The album is available from Jamendo in VBR MP3 format.

Their first release from 2006 titled The Kyoto Connection I is also available. In fact you can get both of these albums from their web site. They ask that you register first but you don’t have to. Just click the download button. You can also get the first album from The Internet Archive. Both of these albums are Creative Commons licensed. It’s pretty much the same formula, relaxing electronic music with a dash of world groove but it is a great formula. “Fly” and “From Earth to The Sky” are stand-out tracks. The album is available in 192 kbps MP3. If you like the music, support the artists by buying their CDs in higher quality sound.