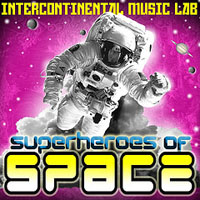 “Superheroes Of Space” from the Intercontinental Music Lab

The Intercontinental Music Lab (IML) is a world-wide music project whose aim is to promote musical collaboration. The core contributors, originally from Cambridge, England are now writing and recording music all over the planet – and new international collaborators are being enlisted every week. IML Collaborators submit backing-tracks to IML H.Q. where they are randomly redistributed to other collaborators who write lyrics and record vocals. The subject of IML’s first album was “Superheroes of Science”, second “Superheroes of Sea” and the latest ones’ is “Superheroes of Space”.

“Superheroes of Space” is a fun and interesting pop album and the last one in the Superheroes trilogy. It’s a bit on the alternative side, but it will not disappoint even the most conventional listener.