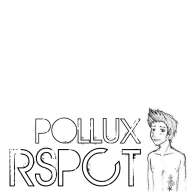 The album Rspct opens up with a track that’s proper for its role: Rspct Intro features a thin but layered drone shifting from this direction to that until it renders itself redolent of aircraft sounds, or of spacecraft ones (it depends on your imagination, really) and, consequently, creates the illusion of one taking flight, perhaps toward Pollux â€“ not the artist behind the album, but the brightest star in the constellation of Gemini, from which the musician presumably took his moniker.

Pollux, whose real name is Arnaud Barbe and described on his website as a 22-year old boy from Grenoble, France, indeed works with thoughts of astral things in mind, as is manifested in this four-track release that features remixes of originals done by like-minded artists. It is rife with the stellar: the beats, melodies and textures; the effect these elements create, and the regard in which he holds the musicians to whom he pays tribute in this album.

Pollux took a track each from the discographies of Curtis Lehr, a k a Argiflex; Adam Crammon, a k a Graffiti Mechanism; and Patrick Doyle, a k a RedSk, and spun them in interesting ways, to say the least. Discounting tempo, which is a commoly tinkered-with element, the most palpable difference he created between the remixes and the original tracks is in the textures. For example, as Graffiti Mechanism’s Calm Spring Chaos is somewhat obtuse and subdued, Pollux’s remix, which appears as the third track, is sharp and aggressive, but remains enchantingly ambient nonetheless.

To sum it up, one who is familiar with the original tracks could tell these cuts are remixes, but would at the same time attest to an altogether different listening experience. And that’s what good electronica remixes are all about, if you think about it. The album lives up to its title (notwithstanding any other interpretation of the word Rspct) and perhaps warrants the same regard from its listeners, if not the artists themselves to whom the work is dedicated.