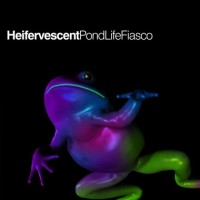 Jangly mixed up pop rock music from Andy Doran’s head. Heifervescent is essentially Andy Doran creating beautiful, sullen, sometimes dark but often melodramatic songs for his own and everybody else’s pleasure. Doran echoes a Britpop flair in almost all his compositions and creates a nice synth orchestra background.

Pondlife Fiasco is filled with 10 tracks that deal with various topics and subjects. It might not be an album that sends cupids arrow straight on like love at first sight, but it definitely gets to you after a couple of listens.

Pondlife Fiasco opens with “When the Stars fall from Grace” which talks about a guy desperately trying to impress his lover, but failing so badly at it. The nice thing with Heifervescent is that he incorporates acoustic pop, even slightly dancy beats, and mixing it up really well with slow, synth driven tracks without lulling the listener to sleep and boredom.

His melodies as well as his soothing vocals force you to listen to the lyrics; taking note of everything that he’s saying. There are 10 fun tracks for you to choose from, each one is loaded with shimmering guitars and poppy beats.

Doran was previously a member of alternative band Monkeyland as their singer and songwriter. After it fizzled out, they went on to create Cannula after Monkeyland’s ex-vocalist David Spencer developed this problem. Pondlife Fiasco is the fourth album released by Doran under his moniker Heifervescent.

This is definitely a great album that grows on you after several listens. You get fun tracks that are perfect for an afternoon lounge in your favorite little spot. If this one doesn’t quite make it for you, you have three other albums from Heifervescent to choose from all under a creative commons license.

This work is licensed under a Creative Commons License.