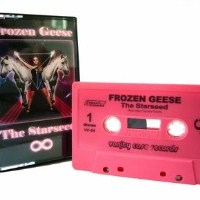 Frozen Geese is made up of instrumentalists, Dave Lazonby and Graham Baily. Hailing from Leeds, UK, the duo is bent in energizing their listeners with their brand of psychedelic electronic rock. Their sound is both rough and smooth at the same time, providing listeners with a real treat for their senses.

The Starseed is their first full record and was released in cassette only back in 2010. It might be weird and unusual to release their compilation in a format that’s considered obsolete by many. Luckily, the duo couldn’t stop the buzz around their music and finally made the record available as a digital download giving plenty of online music lovers a chance to hear this amazing album.

It might seem unthinkable that someone would dare to release a record that’s only available in cassette but you got to give props to these guys for the gamble. Cassette tape or not, this compilation is worth seeking out if you love alternative noise rock.

The Starseed compiles 11 tracks that are both unusual and exciting. It’s hard to tell whether these songs were structured or pretty much improvised, whatever the case maybe, the result is a beautiful explosion of sounds, spoken word, synths, and rhythm that’s enjoyable from any angle. There’s over 70 plus minutes of pure instrumental sonic experience that certainly does its best to capture the listener’s fancy.

Songs like Self Fascination Sunday and The Starseed Transmission both exceed the 10 minute mark while only three songs actually hit below the 5 minutes. In between those minutes, the duo showcases their penchant for jazzy, spacey rock; occasionally mixing it with psychedelia and even a slight folk feel.

Overall, it’s one of those records that you should keep at your side if you’re feeling a little dangerous, trippy or simply want some really cool mood music. You can download the album for free. It’s licensed under creative commons and shouldn’t be missed.

This work is licensed under a Creative Commons Attribution-ShareAlike 2.0 UK: England & Wales License.