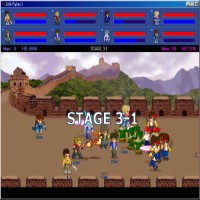 Don’t you just love it when little guys start fighting? Well, if you have been looking for a fun game with “chibi” or little characters, then Little Fighter 2 is the right game for you.

Little Fighter has definitely climbed its way to the top of the freeware games list as a fast paced street fighting style game. The game lets you play against bots or lets you go on a melee with another player. The game is definitely not difficult to learn. You can easily customize the controls to whatever is most comfortable for you.

Despite its simple gameplay and cute graphics, Little Fighter 2 is a very addicting game. Although it might take some time for you to understand the game, with the problematic English translations and all. However, once you do get the hang of it and get yourself acquainted with how it goes; prepare to spend tons of time playing the game.

As mentioned, you get pretty basic controls. Players have the option to move up, down, left and right. You can also defend yourself and jump. The nice thing about this game is that you can share one computer keyboard among four players. It might get a bit cramped but it can work great.

You have the option to fight alone, go by groups or even whole armies if you like and the choice of fighters is abundant. Players can choose from over 24 characters, allowing you to learn some special traits and skills with each one. Despite the stripped down graphics, the game runs great although sometimes it does load a bit slow.

Overall, the game is pretty fun to play. Hook up with your officemates or classmates and have an awesome time.