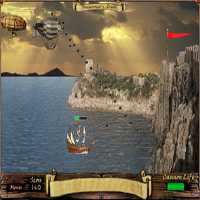 In Pirate Cliff, you play the role of a young pirate who has just found a sizable amount of treasure tucked safely in an island. However, a problem begins to arise as word begins to spread about the treasure you have just found. Soon after, hordes and hordes of pirates attempt to land on the island and get the treasure for themselves. Obviously, being the unrelenting pirate that you are, you do everything to protect your treasure–even if it means firing at your enemies like crazy.

Though there’s none of the complex and overlapping story lines in this game, it is overall entertaining. You just have to prevent the pirates from reaching the cliff; once they do, you start all over again–this time with more enemies and better armament. To push the enemies away, you have your own ship’s trusty cannon and gunpowder to help you.

As the game progresses, the difficulty gets relatively harder, but not impossible to beat. The cannon power will also level up, which means beating the much stronger enemies on the more difficult levels is not exactly hard. Sometimes though, the enemies can be frustrating. They pop out one after the another, and sometimes even simultaneously. Even in real life, fending off 2 pirate ships at a time is an impossible feat.

There is also a health bar both for you and your enemies. Tracking just how much cannon blasts the enemies need before they are finally wiped out are therefore easy to calculate.

This is the game’s first version, so expect some things that need to be improved—including the weird way enemies fire their cannons. The graphics aren’t also bad. To render Pirate Cliff in 2d was a good decision, especially since it is just a side-scroll action game.

All in all, for a game that’s 11.75 MB large and absolutely free, Pirate Cliff is a good way to pass time without getting bored.