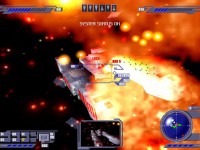 Time for some very addictive arcade fun and this time around the treat is for the desktop lovers. No Gravity is a highly addictive gaming action with very neat graphics, gameplay mechanism and environments. This no nonsense game seems to win a favorable spot in fan books around the world, specially when it is being offered as a free and legal download.

And although the developers Realtech VR have shifted to the more competitive mobile platforms like iOS, Android, WebOS – No Gravity remains a classic and provides a highly refined game structure.

Players in this uber-cool classic are put in the year 8002 on a system called the OOLRO 3 in which, the KROSSO empire is deemed to exist; the oldest and most powerful in existence with thousands of colonies. The eighth millennium celebrations have just been concluded and so have the happy days, as a strange and mysterious disease has begun to spread. The possibilities are terrifying, as the disease could be related to the mind.

The environment of No Gravity in which the player is immersed is mind-blowing with a futuristic universe made up of five intergalactic worlds. In the dawn of more realistic HD gaming, old-time hardcore fans will love this arcade game for allowing them to hop into space battles against space stations, space-fighters, bosses and much more. The total number of 55 mission is just eye-popping and hard-hitting with ten training exercises thrown-in to get a hang of things.

Gamers enter a real-world 3D textured surrounding with missions not only setup in the deep space, but also inside enemy camps with the highest possible security forces working against you and your mission. Players are also required to have a detailed information about enemy space, help in escorting of friendly ships and defending their own space station from any threat and foreign attack.

In-game, players are provided a brief synopsis of the mission to be accomplished. Few missions grant the players to have a wingman and orders such as “Attack enemy”, “Retreat”, “Protection of Base” can be given adding to the whole realism of the gameplay structure. The game consists of episodes, each episode is made uo of 10 missions on a whole. At the end of 1 episode, players need to gear up and destroy a large base-station (More of a Boss level). The game ends with all 5 episodes come to an end.

Overall, No Gravity is a true breather of sorts and helps in breaking away from the “reality in your face” gaming with the dawn of HD games and high-end developing engines. The classic addiction is up for a free download and it is sure to hook you up with a minimalist, yet death-defying approach.