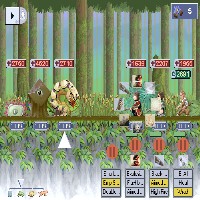 Labeled as one of the “near perfect” RPG games in town, The Spirit Engine 2 definitely can stand on its own. The game is a 2d, side scrolling RPG game created by Mark Pay.

The original Spirit Engine was released in 2003 and this version is a more improved sequel. It features great gameplay and great storyline, much improved from the original. TSE 2 also features great soundrack and cool pixel, anime type graphics. The Spirit Engine 2  has been praised as having a great storyline, essential to any RPG game’s success. It combines interesting dialogues and a whole lot of monster bashing. When not fighting monsters, players can easily talk to NPCs to get missions, buy and sell items and of course, travel to different areas. One nice thing from the game is that it issues a stern warning against talking to just “random” people since you’ll never know you might be talking to terrorists and other nasties lurking around.

Another great thing with the game is that the characters are completely fleshed out. Each one has a unique background and storyline attached to them which helps players get attached to their counterparts. You are also given a lot of skill sets. Instead of just having a specific skill set similar to regular RPGs, you can customize your own skills by enhancing one skill to defeat particular enemies. Now, I know what you are thinking, how come you can “unlearn” a particular skill to learn another. Even though it might not be that rational, it is still a neat feature.

Initially, the game came with a $16-15 price tag if you want to play all the chapters. However, since February of this year, the game has been offered as a free game. Of course, you can donate some dough if you think that the guys did a great job with the game.