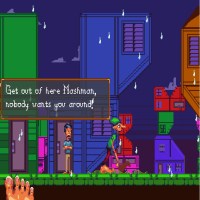 Mash Man is actually a remake of a classic NES Action 52 cartridge game. Redone by Curtis Kling, the developer creates his own take on this classic game that features a grape masher that uses his feet to mash grapes and create wine.

Of course, all should be well and dandy for our masher until the townsfolk decided to buy themselves fancy machines to mash the grapes. The machines prove to be more efficient, hence, our protagonist is banished into the nearby forest to live in exile.

For those of you that are unfamiliar, Action 52 was actually an NES cartridge touted as having 52 games in one. Despite the hype, the games contained plenty of errors and bugs subsequently, it was discontinued. Fast forward today and a group of game developers have taken up the task to remake these not-so-great classics and at least turn them into something slightly more tasteful. Mash Man is among the results. Check it out for yourself. Mash Man is a bit of a short game though. There are only 2 levels in the game but there is an option to finish with an alternate ending, provided you are a bit more cautions on what you are mashing in the game.

In the original game, your goal was simply to squash enemies with your gigantic feet. This  gameplay was pretty much retained. Basically, Mashman could only walk to the right, jump over tacks and spikes as well as jump on enemies. According to its new makers, they “tried to take the mood of the original game and expand on it, since it doesn’t really have any kind of unique gameplay elements to use.”

As a result, this Mash Man version is more of an improvement in game design and storyline rather an actual improvement or change in game controls etc. Pretty much, the game is much improved from before. The graphics are obviously much better and the storyline contains more depth. Game wise, there’s actually a lot to enjoy here. Try it out.