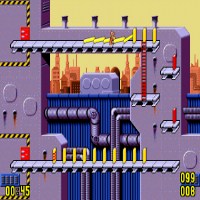 Pushover is a revamped version of an old puzzle game back in the 90s. In this game you have to figure out how to arrange the dominoes properly so that you can knock all of them down with just one push.

The game is pretty much the same as the older version with several improvements added in the bag, of course. The puzzle pieces start off simple enough, but they do get much more complicated as you progress throughout the game. To add to the pressure, there’s a time limit for each level so you have to be on your tippy toes when figuring out how to arrange the yellow pieces.

Pushover lets you play a little ant that’s on a quest to save ” Colin Curly’s Quavers” (Colin being a dog and the Quaver’s are his snacks.) As mentioned, to complete a level, you will need to arrange yellow blocks a certain way so that when you push the first one, it will all fall down much like dominoes. The game doesn’t stop there though.

To make it interesting, the dominoes aren’t your typical domino sets. There are about 10 types of blocks present in the game and each one showcases its own unique characteristics. For instance, there’s  a “delay” domino that takes a few seconds before falling down and there’s also a “tumbler” domino that can’t seem to stop falling down. Also, your character can easily die and since he’s only a little ant; he can only push once.

All these added elements combined with the basic gameplay creates one interesting game that can become quite additive. The graphics are also quite updated and easily pleasing.

There are also times when the tediousness of having to arrange the dominoes (which can take about 10 minutes alone) can become tiresome. Nevertheless, there’s enough “hooks” so to speak, to keep your interest glued onto the game for at good while. Go ahead and give this nifty puzzle game a try.

The original game was published by Ocean and the remake was made by Ishisoft. Pretty cool puzzle game. Give it a go!