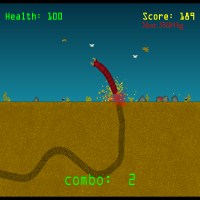 Death Worm is considered one of the classics. It’s a quirky little freeware that’s absolutely fun to play. If you remember Kevin Bacon running away from these giant worm-like creatures in Tremors, and you actually enjoyed it; then here’s your chance to play the worm instead.

The game lets you play as the invertebrate who has quite a big appetite. You can eat soldiers, surprise or fling around elephants and simply enjoy amazing chaos using your little big worm.

Like most sand worms, this one is a pretty angry one. All he wants to do is eat and eat. Hence, you have to eat the horses, eat the elephants and even eat the people. Of course, they won’t take it standing. People will shoot and fight for their property so you have to be a bit careful.

Some of them will be fighting back using land mines or electro shocks. However, the longer the battle ensues, the more the townspeople will realize they need to bring in the big guns to defeat you. Pretty soon, you’ll be dodging bullets from high powered rifles and avoiding bomb blasts from overhead. Hence, it’s important to anticipate the worst from the people you are fighting against.

Controls for the game are typical. You can maneuver your worm around by using the arrow keys. Come to think of it, the game is like a more graphic version of Snake. You know, that mobile game that usually comes free in your old phone? It’s just like that, along with several upgrades.

There are a couple of tricks you need to learn as well. For one, you need to learn how to launch yourself in the air since there are times when you will have an enemy that’s flying.  The more combos you can make while making your worm “fly,” the higher your score.

Overall, the game is pretty interesting. The graphics are simple. There’s absolutely nothing fancy here except for the fact that it’s plenty of fun to play.