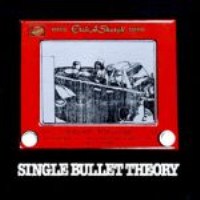 Single Bullet Theory is the punk band that should have made it big. Initially founded by Frank Daniel, Dennis Madigan and Michael Maurice Garrett; the trio have been playing music together since 1971. After a couple of years and several members later, they settled with the name, Single Bullet Theory.
They play anything from fast paced, chanty songs to melodic beautiful rock ballads but their sound is mostly characterized by pop punk beats.

They got as far as opening for Patti Smith and signing a deal under CBS Records. They also managed to release singles and were received quite good by the people. Unfortunately, CBS pulled the plug for promoting the group and most of the material they had never saw the light of day. Thankfully for us, it gets a second chance as a free download under a creative commons license. Pure genius art rock if you ask me. This compilation includes most of the band’s unreleased singles. It also compiles the band’s Billboard Top 100 track, Keep it Tight. This single was released back in 1981 and features a poppy punk beat with a great rhythm. Even though it reached #78 on the Billboard, problems with CBS Records kept mounting and the single was eventually pushed back from release. Nevertheless, the track is a catchy 4 minute song that maintains a stable beat throughout. It features a new wave flair that’s easily likable upon first listen.

Other tracks that are worth checking out from this collection includes the more put together, summer fun sound of Peggy Got Her Eyes Full. The track clocks in at 3 minutes and showcases a fun sound that makes the band more interesting to listen to. There is a Boy is also another cut worth checking out. The single has a nice punchy beat that would have been a nice staple in local airwaves during the 70s and 80s.

Although the band is hailed as one of the pioneers when it came to art rock back in Richmond, it’s hard to really see or hear that in their sound. They lean more towards being a pop punk rock band than an art rock one. Whatever labels they might be slapped with, there’s no denying that this album definitely should have made it to the top.