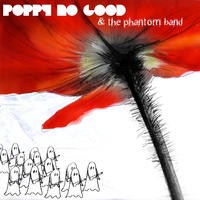 Finding out more about this group is tough. For one, most of their descriptions are in French and I don’t speak the language, but nevertheless, their music is interesting enough to merit a listen. Poppy No Good is an eclectic 5 piece crew that love to blend unusual instruments, vocal work and an overall weird alternative, pop rock vibe.

This is the group’s latest release and it’s filled with psychedelic good vibes. The group’s name was actually derived from a song by Terry Riley. This record was released back in 2008 yet it still sounds up to date, much like any current Brit indie rock group floating in Wonderland.

Give these a listen.Poppy No Good and the Phantom Band opens with the upbeat, 70s psychedelic dance beat, If I Said. Incorporating drunk vocals, cool bass playing and an awesome beat, this one provides a great opening for this unusual compilation. It’s then followed by a more mellow cut, Alcohol. This slow track is filled with quirky lyrics and smooth vibe. It’s the perfect soundtrack to drunken nights in some random bar and waking up with a serious hangover the next day.

My personal favorite out of this bunch is the third track, Yellow Moon. With its whispery, high pitched vocals and seedy sound, it’s quite a treat. This four minute track is a trippy ride that showcases repetitive chanting of the words “yellow moon” and a sleepy, psychedelic vibe.

Although the group has been in and out of the scene since their debut, they seem to be back with a vengeance this 2011. They will be releasing a second album by February 2011. Give the album a download,