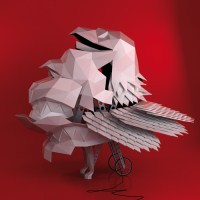 It’s been a while since I’ve checked in with my loud side. Here’s one really loud metal, prog album for you then. Fairy Crimes is Watertank’s latest record. It’s a short 6 track compilation that’s offered for free.

Members of the band are based in France and seem to be heavily influenced by various metal, progressive and even hardcore bands. Heavy double bass drumming, loud and prominent guitars as well as occasional honey voiced vocals are prominently displayed in the band’s sound.

Watertank has been around since 2003 and have had their fair share of success. They’ve gotten the opportunity to share the stage with artists like Capricorns, Torche and Lair Of The Minotaur to name a few. Close that door of yours, turn the volume up and start rockin’! This City’s Got Laws opens and welcome the listener to this record. This instrumental track features an awesome guitar riff and sets the stage for the rest of the loud tracks that follow next. On its heels is the Tool sounding, Felony Days. With its progressive feel, the cut is an easy love for most rockers out there. Although I’m particularly keen on the vocals for this one.

Meanwhile, title track, Fairy Crimes, is more my type of music. The cut starts out strong with heavy drumming and trashy guitars. It’s essentially pure mayhem for about three minutes or so with this song. Attract Drama, on the other hand, is another cool track in the compilation. I’m still not a fan of the vocal work but the cut packs enough punch to make it part of my playlist.

Since their inception, the band has released a demo back in 2004 and have gone through a lineup change. These new set of tracks serve as a comeback for the group. Moreover, they’re also hitting the stage again after a hiatus with new faces on board.