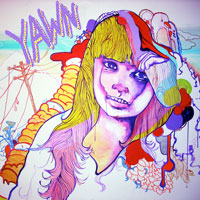 Yawn: a new EP from the windy city

I know there is more genres of music than many of us can even count, but listening to the new EP by Yawn I am thinking we should probably add a new one the list, just this once. Yawn (formerly known as Metrovox) uses a combination of tropical grooves, tribal rhythms, energetic drum loops, just a touch of 8-bit, and some great guitar all dressed in a electro pop and psychedelic finish. Often compared by the blogosphere to the music of Animal Collective, the band consists of Adam Gil, Daniel Perzan, Jorge Perez, Sam Wolf and already has a number of success stories behind their work.

This relatively new to many group, which have been working together ever since high school, has already been a part of the Pitchfork Music Festival where they opened for the Local Natives, played together with Delorean, and performed all across the North America in venues ranging from Webster Hall in New York, to Lincoln Hall in Chicago, and Phoenix Concert Hall in Toronto.

I am still trying to figure out why a band would name itself after the involuntary action of inhalation of air, stretching of the eardrums, followed by exhalation of breath – which, more than anything, is often thought of as a sign of boredom. The new EP certainly didn’t put me to sleep, nor did it made me tired or bored, but rather induced some involuntary finger-tapping-to-amazing-beats action that was soon followed by writing this little post. Well I guess it’s right what they say….yawns are contagious indeed.

So what first drew me into their music – percussion. You just have to love how its sets up the rhythm of the entire song, how it makes you tap your fingers and move your head to the beat…. and everyone who ever listened to any of the amazing percussion performances in the NYC subway system or White Rabbits will know I’m telling the outmost truth. But what made me stay and listen to the rest of the release was their unparalleled ability to melt electro pop, guitar grooves, tribal rhythms, more than dynamic drum loops, some 8-bit, and added electronic sounds into five pretty great tracks. The pretty amazing vocals and catchy choruses helped as well.
As any young band, I am sure Yawn will only get better so lets hope there is even greater release in store for us in the future.