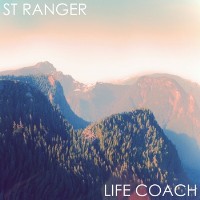 After joining several bands on their own, former highschool mates Andy Phipps, Jake Ashton, Bruce Kimura, Jakeob Ewell and Jeff Taylor met up again and decided to create their own band, St Ranger.

Echoing a beach rock vibe with beautiful harmonies, the band first got together back in 2010. Since then, they’ve released a two track compilation, Ohnowoe, and this short but charming EP, Life Coach.

Listening to St Ranger, it’s easy to notice influence from bands like The Beach Boys to Animal Collective.

Even though Life Coach only contains 5 tracks, it’s probably one of the few EPs that listeners will love from beginning to end. The band’s soothing three-part vocal harmonies are beautiful alone but when coupled with the creative, sometimes complex, musical structures; you get songs that evoke familiarity but are also rather different. The catchy melodies also win points for the compilation.

One my personal favorites in the EP are opening track, It’s ‘Appening because of its unconventional beats and uptempo tune. Another favorite is the funky, retro sounding, Take Time. The entire album is quite charming, really; something that’s easy to spend the entire afternoon around without much complaining about bad music.

You can grab the download absolutely free, just head over to their BandCamp page. Of course, you can support the boys by purchasing the vinyl version for $12. Not a bad price for good indie music if you ask me.