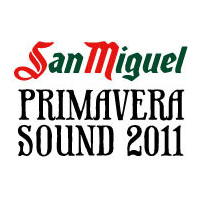 Tents, amazing food, crazy outfits, dancing, drinking, and great music that turns thousands of people into your soon-to-be closest new friends; sounds like a ready-made vacation. And if you want to feel like a part of this summer music festival ‘movement’ be sure to check out the new mix from Primavera Sound.
Since crossing into the new year the Primavera Festival already released its preliminary lineup for 2011, and as many of the artists also have some of their mp3s available on the Free Music Archive, Primavera Sound put together a little free album of what is coming up this year.

Primavera Festival, one of Barcelona’s most popular music scenes is on it’s way to join some of the best music festivals in Europe such as the famous Glastonbury Festival in Somerset, The Montreux Jazz Festival in Switzerland, Benicassim Festival in Spain, Oxygen Festival in Ireland, Pukkelpop in Belgium, and The Roskilde Festival in Denmark.

The Festival is held in Parc del FĂ˛rum leisure site, located just 6km from the center of Barcelona, in late May/early June and is a host to over 100,000 people from all corners of the world.
Some of the most notable acts from previous editions include Sonic Youth, The White Stripes, Igy and the Stooges, The Smashing Pumpkins, Portishead, Neil Young, Bloody Valentine, New Order, Pixies, Pet Shop Boys, and Lou Reed. But Primavera is unique in that it mixes established headliners with up-and-coming artists (some of which you can hear on the released compilation) and its those eclectic sounds that are attracting bigger audiences each year.

This year’s lineup will feature some of the best from alternative, indie, electronic, pop, hip-hop, dance, folk, jazz, metal, and experimental music including artists like Animal Collective, Belle & Sebastian, Caribou, Male Bonding, Of Montreal, PJ Harvey, Sujfan Stevens, The Flaming Lips, The National, and many others.

This work is licensed under a Creative Commons Attribution-NonCommercial-NoDerivs 2.0 Generic License.