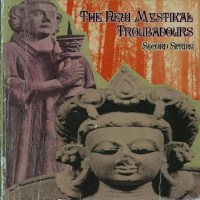 Made up of duo, Dave Gibson and Matt Persinzki; The New Mysitkal Troubadours will help complete your relaxing afternoon with its trippy and soothing folk sound.

Second Spring is the second compilation from this Baltimore, Maryland duo.Their first self-titled album was released back in 2009 and garnered a positive response as well. Much like their first, this second album is mostly comprised of weird stringed instruments, trippy vocals and lovely (not to mention complex) melodies.

Both members of the band aren’t exactly new in the business. Each member has his own career aside from the group; Matt plays at another band called The Agrarians while Dave also plays as a solo artist.

The first time you listen to them, you might find their music quite unusual. Their sound is eclectic; mixing various instruments, drones and very folkish vocals. Songs like, Second Spring, Another Wild Scene, and Fragment of a Classical Afternoon, perfectly encapsulates everything The New Mystikal Troubadours are about. Along with their signature psychedelic melting pot, the songs at times feel like borderline weird indie rock, the kind you’ll hear from The Animal Collective and other experimental indie bands. It’s this capacity to mix various interesting elements that make the band a must listen.

If you’re not used to this kind of experimental soundscape, then it might take you a few listens to really appreciate the album or the songs. Second Spring is as enchanting as it is mystifying. Personally, I love how its so different. There’s a big chance you’ll end up sitting there lost in the sound as you take in everything from every direction. Definitely a great album to check out.