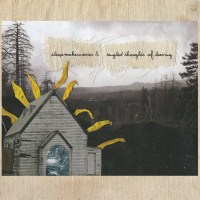 Making an epic record isn’t easy. This is especially difficult if you’re a fairly new band. Nevertheless, it’s always a great experience to see new artists push the boundaries and deliver a great record despite obscurity. Sleepmakeswaves is one band that manages to hit everything right on the spot.

This Aussie group has released 3 EPs under their name, including this one –In Today Already Walks Tomorrow. They’re currently gearing up for the release of their debut album by July 2011.

For the meantime, you can check out this amazingÂ EP. It’s a beautiful mix of progressive, instrumental post-rock that will certainly make you smile.Â

In Today Already Walks Tomorrow has won quite a lot of raves from both fans and first time listeners. The 6 track EP is filled with instrumental crescendos, gorgeous melodies and beautiful climaxes.

From the opening cut, I Will Write Peace On Your Wings and You Will Fly Over The World (and yes the guys do have a penchant for long titles) you get an amazing welcome track that will make any progressive hard rocker smile like there’s no tomorrow. The song opens hard, slows down, then swells to a cacophony of guitars, distortion, and so much more. Definitely a great opener for the record.

The momentum doesn’t end there though. It’s followed by the equally interesting but more low key, Exits to Nowhere. The song would make the perfect background for a never ending drive up some hillside road. Other tracks like So That the Children Will Always Shout Her Name and What We Cannot Speak Of We Must Pass Over in Silence are both ambitious in their own way.

The former is a thrilling, moody ensemble that maintains a mellow, almost sweet vibe then carefully builds into a climactic barrage of drums and guitars. It’s one of my other favorites in the record. The latter, meanwhile, beautifully caps the compilation. It seems like the type of song Voldermort should be playing on his deathbed. Quiet, enigmatic yet deep.

To say that Sleepmakeswaves captivates is an understatement. With their upcoming debut album, these guys are definitely worth watching out for.