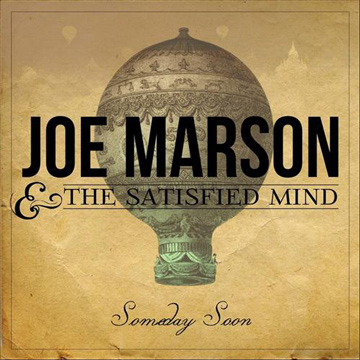 It’s rare to meet an authentic and soulful alternative rock singer these days. However, if there ever was one that came closest to belonging in this little niche; you can bet Joe Marson is one of them.

Armed with a guitar, beautiful melodies and a voice that’s heartfelt and mesmerizing, Joe Marson and the Satisfied Mind has created a gem of a record.

Currently based in Brooklyn, this is Joe’s latest release. Consisting of previous recordings as well as originals, it comes in the heels of the 2011 record, Post Cards From Siren City. The album enchants and provides a fresh take of the alternative scene. Perfect for lovers of musicians like Ben Harper and Jeff Buckley.

Comprised of cuts oozing with charm, the album is available in this special snippet from the artist himself. Although if you want to help him out, you can purchase the entire record over at iTunes .

A few standout tracks to watch out for include My Luck Stays the Same; Joe’s strong and expressive vocals as well as his deft guitar skills transform the cut into a genuine blues, alternative rock number that’s worthy of a praise.

Someday Soon is another lovely single that’s worth noting of. Mixing blues and acoustic guitars along with very reflective lyrics. It builds up and soars nicely as the track rolls along. Love Left in Me as well as Leave on, Leave the Band are two other tracks to put on your playlist.

Joe Marson has played different types of music from hip hop to jazz and has traveled across the US with his music. With his 4 piece crew, together they create a sound that’s rich and revealing. Each one is filled with beautiful intensity and soul that reaches out.

Like much of Jeff Buckley’s pieces, it’s the kind of music you listen to several times and each time it sinks in; making the listener love it more and more. Take a listen. You won’t regret it.