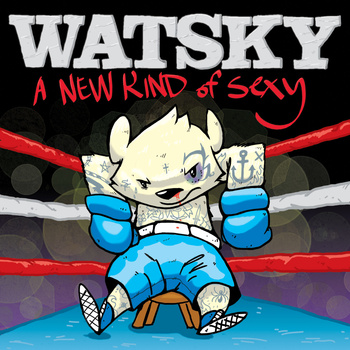 George Watsky is a winner of the Youth Speaks Poetry Grand Slam and the Brave New Voices National Slam championships. He has been a featured performer on Russell Simmons Presents Def Poetry on HBO and one of three poets who performed live on FOX during the NAACP Image Awards, among (many, many) others. So why did it take me so long to find out about a guy who have already shared billing with icons such as Stevie Wonder, Beyonce, and Talib Kweli? Wish I knew, but I know that there is no reason why you should wait any longer to get to know him too.

Watsky is an emcee, writer, poet, performer and, as stated by popeater.com, a rapper spitting his rhymes faster than a Speed Racer drives. Born and raised in San Francisco (currently living in Los Angeles), he graduated from Boston’s Emerson College and have already performed at conferences and universities in over forty U.S. states and Australia.

His latest solo debut, ‘A New Kind of Sexy’, is a compilation of sixteen great tracks, all with the same flavor that first brought Watsky into the public view and onto my playlist. This is why I am still a bit nostalgic about the very first songs that caught my eye; I Got This Love, with a golden-voice of yet another youtube sensation – Passion, Color Lines featuring Catch Wreck – a local Boston favorite, and Everything Turns Gold performed together with an acclaimed singer-songwriter Mieka Pauley and a hip hop legend Gift of Gab. If you want to check out these songs, also available as a free/pay-what-you-want download, head over to Bandcamp.

And sure, Watsky might have something of a Michael Cera look but ever since the release of his music video, Pale Kid Raps Fast, he has been compared to Eminem and Busta Rhymes almost as often as Tina Fey’s performance on SNL to Sarah Palin.
The video have already became an instant internet sensation being featured on Reddit’s home page and getting nearly sixteen million views to date.

Most importantly, however, Watsky is a spoken-word artist with an aim to cross-pollinate the stage, screen and stereo. So it is to no surprise that his work extends way beyond recorded music and his poetic creations frequently visit the realm of a theater.

Want even more? Watsky speaks green. As a winner of the first Brave New Voices Sundance Global Warming poetry competition, he has since been invited twice by Robert Redford to perform in Sundance, Utah. He served as a host of the final concert of Powershaft 2007 in Washington, DC, and performed at Rock the Debate in Mississippi right before the 2008 Presidential debate. His involvement in the sustainability movement have also brought him to Sydney, Australia for the opening of Green Cities 2008 and to Greenbuild Chicago taking the stage right before President Bill Clinton and in 2011 he performed live as a guest on the Ellen Degeneres Show.

And if you do like what you hear remember, George Watsky travels.
He travels to wide and far places to leave his words behind just as he did at some of his highlight live performances at the San Francisco Opera House, Shrine Auditorium, Kennedy Center Concert Hall, and the famous New York’s Apollo Theater. So if you want to catch his next big gig be sure to check the official website.