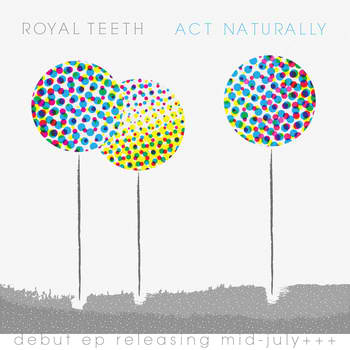 After some time spent on perfecting their lush melodies, it looks as if Royal Teeth are ready to become the next big thing.

Their newly released debut album, Act Naturally, has five hits that will surely fit into everyone’s playlist. One thing I like about Royal Teeth’s music is their eager attempt to try something new producing tracks that play between dance pop and electronica.

Wild opens up with amazing backbeats and heavenly guitars that transport you to technicolored clouds of indie universe. Patterson’s voice is superb considering that she has not been a part of a band before. Their love for adventure is shown when they covered The Knife’s 2003 single Hearbeats. Recording a popular song is a tough job but they pulled the act in a sleek yet haunting delivery.

One of the standout songs is My Donna; this upbeat track has such infectious lyrics and danceable grooves. The vocal duo flawlessly blends with the playful keys and tambourines. It will surely make you move and forget all your troubles.

Hands down, Act Naturally is a great debut EP. It will successfully launch Royal Teeth into indie-stardom. The polished songs, meticulous arrangement and high level of craftsmanship prove that this band has a lot to offer and is willing to take the risk. This collection is hypnotic, fun-loving and definitely worth listening.