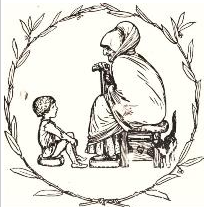 Reveal the kid in you through the classic Grimm’s Fairy Tales, a collection of 25 heartwarming stories including all-time favorites such as Red Riding Hood, The Frog Prince, Cinderella and many more.

First published by Jacob and Wilhelm Grimm (popularly known as the Brothers Grimm), it was considered as one of the founding works of Western Culture during World War II.

The process in collecting such highly imaginative tales didn’t come easily for the brothers. To gather these stories, they had to go to the countryside and listen to age-old oral tales.

The first volume was widely controversial due to its unfriendly content for children, thus resulting in many changes in the stories some of which included turning Snow White’s wicked mother to an evil stepmother. And it is exactly changes like this one that attracted many academics using the book for scholarly purposes.

In 1825, the Grimm brothers released a small version of the stories composed of watered down tales suitable for young readers. An immediate nursery favorite, this collection soon won the hearts of children all over the world.

Grimm’s Fairy Tales will remain a classic even with the future generations, and will certainly keep shaking up the world of literature with it’s wonderful and quite unusual imagination.

Grimms’ work is definitely a must-read. Not only will the tales teach you important life lessons, it will also take you on the ride straight into the past. So cuddle up, read and prepare your journey back to wonderland.