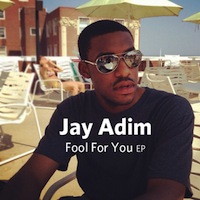 Jay Adim: Fool For You EP

Jay Adim is an actor, singer, songwriter, and pianist who is originally from Lumberton, New Jersey. At a very young age of 4, he performed in front of an audience which started his inclination to music.

He aims to share his fresh sound infusing jazz, r&b, pop, and rock music to anyone who wants to listen. His mom used to play Earth Wind & Fire, Yanni, and the Chi Lites around the house, which may explain his tendency to sing a lot of tenor heavy songs with his baritone voice.

Fool For You EP is an album, which conveys a very powerful message of addiction to anything/anyone. It was released on January 29, 2013.

The message of the album was very obvious on the Intro track. As the lyric goes, it says, “This might sound crazy, but I think that I’m obsessed with you.” The track has a part sung in Spanish that makes it more romantically appealing.

Sky is a track about dreaming and bringing those dreams into reality. It is a very inspirational song made more beautiful by the jazz vibe of his voice.

On the other hand, Fool For You, is a love song that talks about being free from his obsession to a girl. The piano playing on the background controls this song. As it reaches the chorus, the piano becomes more powerful and so as his way of singing. The last part becomes very intense as he reaches for the high end notes.