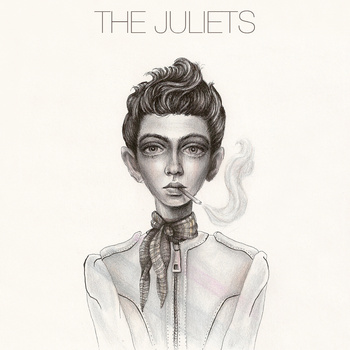 Led by Jeremy Freer who plays piano and guitar, The Juliets are a mix of chamber pop and brit pop with a good dose of soul. Their self titled debut features beautiful string work by Sarah Myers (violins) and Kaylan Mitchell (Cello). The combination of Jeremy’s piano and vocals with the strings makes for a sweet pop music that will make you want to dance. The production is tight but there isn’t a lot of noodling with the sound. You can hear the waver of the strings and the vocals are left pretty natural. The Juliets call Ypsilanti MI. their home.

“Sweetheart” , the opening track,  is the quintessential summer song. It’s ebullient bounce and infectious chorus will stay with you for months.

“Evolved Into” has a serous amble to the piano and rhythm section that breaks into Jeremy’s falsetto.

“Like A Parade” is my favorite track on this ridiculously good album.  Jeremy’s vocals and the strings sound like they are in mono at the beginning, which adds to the impact of the later wash of chamber pop sound.  This waltz timed songs features some interesting singing styles by Jeremy leading to him slipping into the laid back falsetto that strengthens the lurch made by the instruments accenting the waltz time.

Jeremy’s piano into and falsetto ate the beginning of the album closer “Drive You Home” is shades of Freddy Mercury on the early Queen albums.

Some people lament the loss of albums made by huge studios with scores of technicians. Listen to this album and you will hear that there are plenty of artists like Jeremy Freer who have the ability to make beautifully produced music independently.