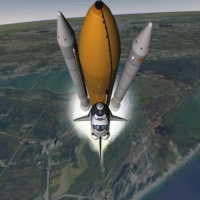 Orbiter is a free space simulator, and it is also one of the most realistic. This isn’t one of those space arcade games where you zoom around and shoot aliens. This simulator will show what it’s like to really be in space. Created by Martin Schweiger, it employs real life physics.

The game takes a while to master, but it’s definitely worth it. Orbiter allows you to recreate classic space flights via its addon packages like Vostok, Apollo, Gemini, Mercury and more. it even has the Space Shuttle which can be launched from Kennedy Space Center. You will also see the ISS (International Sapce Station).

Orbiter also has easier to fly fictional spacecraft which can help new gamers. Apart from recreating history, you can voyage on futuristic space craft and explore the Solar System and beyond. The major moons, eight planets and Sun are present.

Add-on packages include asteroids, comets and dwarf planets. There is even a planetarium mode. In this mode, you will see the moons and planets with labels and their location. Celestial bodies also indicate their interesting features.

Orbiter’s realism is such that planetary motion is modeled accurately. Orbital decay, atmospheric flight, free space and gravitation effects (including non-spherical gravity) are all built-in.

Orbiter has a vast user community and you can download add-ons made by other gamers. Users can deign their own rockets. Serious space flight students can learn about orbital mechanics. They learn by experimenting and playing the game.

Orbiter also comes with a 100,000 star database. In keeping with the realism though, you cannot do any interstellar travel. Orbiter is designed to run in Windows computers.