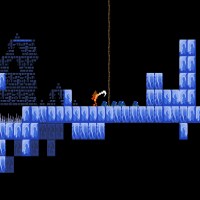 Tiny Barbarian is a cute little platformer where you play a minuscule barbarian who falls in love with the enemy. In this case, a mysterious frost woman who appears out of nowhere bringing in hordes of zombies, wolves and other enemies down your path.

The game is simple but it’s very entertaining and fun to play. It was developed by Michael Stearns and the music was especially created by Jeff Ball.

The storyline was originally based on R.E.Howard Conan story, “The Frost Giant’s Daughter.” In Tiny Barbarian, you are a lovestruck little dude that attempts to defy the odds in order to win over the heart of his beloved. However, it’s not so easy when the other person doesn’t reciprocate your feelings and in turn throws out enemies down your way. Unfazed, you carry on; fighting wolves, dodging projectiles from archers and braving the cold just to prove that your love is true.

Although the game is rather short, there are a lot of fun and entertaining moments in it. Even though it’s actually a love story, it’s not really a sappy one that will make you want to look away or roll your eyes.

Game difficulty is, however, a bit tough to like. The game seems simple enough when beating and fighting against ordinary guys. Then, out of nowhere, you end up fighting a boss and then all hell breaks loose. When fighting bosses, you might as well pretend your dead because chances are they will kill you at some point, whether once or twice or all the time. They will get to you. Of course, if you’re skillful enough or know a way to pass it, then this part might actually become a piece of cake for you.

Despite some inconsistencies in the game, it is quite fun to play. Besides, how often do you get to play a lovestruck barbarian blindly chasing a woman who is trying to destroy him?