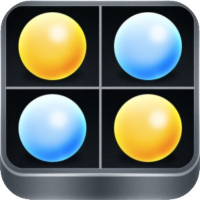 Four in a Row

Four in a Row is a modern version of the classic game. Published by Optime Software, the game will have you tapping tokens on a grid in an attempt to fill a row with four of them. It looks very simple and it is easy to learn, but winning is another matter, which makes it a very addictive game.

Anyone who has played the classic Four in a Row before will feel right at home, but make mistake about it; this is a new game that has been updated to give it a sleek appearance and made for use on Android and iOS mobile devices. The interface is very intuitive so it is easy to pick the game up. The default settings will work fine for most players, but there is an Options menu if you want to change some of the settings like the theme of the game board.

Four in a Row also lets you turn the sounds on or off. When the sound is on, you will hear the crowd cheer you on when you win and groan when you lose. Also, the tokens make a nice sound when they fall and combined with the cheers or groans, make a really nice atmosphere.

You can play Four in a Row in single player or two player mode, so you have your pick of playing against the computer or a friend. if you decide to play against the computer you can choose from three difficulty settings. If this is your first time to play the game, start with the easy level and from there move on to the harder levels.