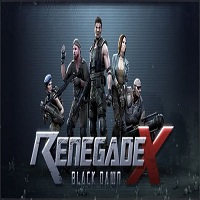 Renegade X: Black Dawn is a free 1st person shooter for Windows. Developed by Totem Arts, the game takes place in the Command and Conquer universe. This means you join the GDI and do battle against the Brotherhood of the Nod. However, this is more than a C&C rip-off as it’s a new game all its own.

There are several single player missions here, and they’re not drawn out, which is a good thing. As you might expect there is a lot of shooting, but it’s not all firepower and bullets, as there are missions when you have to race against the clock, vehicle sections and yes, the escort missions are here as well.
Riding the vehicles is a lot of fun but they can be challenging to handle, and the escort missions will really put you to the test. However, the game isn’t impossible to play, and there are a ton of guns that you can use. And you will definitely need them as you crawl, weave and duck in the battlefield.

The battlefield is one of Renegade X’s biggest strengths as it is just huge. The landscape isn’t just huge, but it shows the power and intensity that you would expect from high tech warfare. The game does a good job of magnifying your task, and the graphics look superb, right down to the trees and scenery. The soundtrack is also pretty good.
If you love first person shooters you will definitely want to give this a try. It’s action packed and does a great job of combining action and strategy.