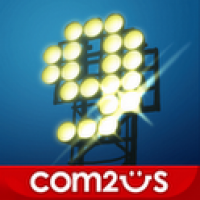 Baseball has always been a loved sport for many, but when it comes to mobile devices, than the fun factor goes to the next level. 9 Innings: Pro Baseball 2011 is one of the best baseball games available on Android & iOS till date.

This baseball treat has been created by Com2US, a developer that has earned quite a reputation for their class of games for both iOS & Android. It was their work, Homerun Battle 3D that really made all the difference in the gaming scene and have not disappointed us one bit with their current offering.

9 Innings: Pro Baseball 2011 is basically a cartoon based graphic baseball game which strips baseball to its bare-minimum. This helps in keeping the game void of unnecessary additions, while keeping it fun throughout. The actual gameplay revolves around the pitcher vs batter dual and is well developed, and leaves very less to complain about. The pitching is by far the best implementation we have seen in any baseball game of recent times.

The more hardcore type gamers will feel a bit awkward with the graphics, though its not jagged or pathetic, it just is not as crisp as Homerun Batlle 3D or Heavy Gunner 3D. Ignore that flaw and everything will fall in place, and actually make you enjoy the overall gameplay it packs-in.

Overall, 9 Innings: Pro Baseball 2011 is a great, simple baseball game. The simplicity of the game is lovable, and its commendable how the developer has tried to keep the game free from any useless gimmicks. A must try for the casual gamer or a hardcore baseball fan, this game just takes the cake. The Android version is offered as a free game, but the iOS version costs a mere $0.99 on the App Store.