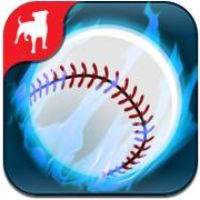 Baseball Slam is an arcade baseball game courtesy of game developer Zynga. And as you might expect this isn’t a baseball simulation as it is full of crazy levels, power ups and controls that are easy to handle. Even if you don’t know much about the intricacies of baseball, you’ll be able to pick this up quickly.

In Baseball Slam you control the batter, tapping the screen to get a pitch, and then drag your finger from the plate to the spot where you want the baseball to go. Every level has a different goal though and come with their own tutorial. However, the levels mostly involve striking particular targets or objects.

The levels in Baseball Slam become progressively more difficult, and it’s not just limited to getting high scores. Once you finish the first five levels you’ll be able to play Baseball Slam’s multiplayer mode online, where you can play against random opponents or your friends on Facebook. In multiplayer mode, it’s all about battling for the highest scores,

The first five solo levels are actually for polishing your fundamentals, and how well you did there will determine your success in multiplayer mode. If you’re having a tough time, you can exchange your coins before each round to gain special abilities.

Baseball Slam also lets you customize your character. More importantly, you’ll be able to unlock more powerful bats later on as well as additional power ups and pitches. There are some IAPs in the game, but they’re not really necessary as you can earn them anyway by playing Baseball Slam.