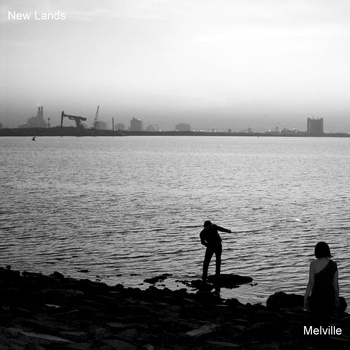 New Lands is a somewhat mysterious band/artist. Hardly anything about them is up online but one thing’s for sure, the group has a knack for brooding and sometimes upbeat electro rock that’ll convert listeners into fans.

Melville is the latest offering from the artist. So far, they’ve released a total of three compilations, including a self-titled debut in 2006 and another record called, Distant in 2008.

This 2010 compilation is actually composed of tracks recorded between 2007 and 2008. They might be a few years old but they’ve still got that special touch that’s worth checking out.

Melville is a 6-track EP composed of slightly melancholic cuts with bursts of dance electro pop. From the start, listeners are greeted with the somber cut, Out of Time; creating a fusion of slow acoustic strumming and moody vocals. One of those atmospheric cuts you’ll want to listen to if you’re feeling especially reflective. In contrast, The Doctor and the Soul, is an upbeat single that seems lifted out of an 80s new wave altpop album. With synth-infused vocals and edgier guitars, it kick starts an upbeat transition for the album.

Meanwhile, tracks like Through the Motions are a bit more pop oriented and coupled with Morrissey-style vocal chops while Tidal, brings back the album to its brooding roots. This final cut is a mixture of electronic synth beats that ebbs and swells in places. It matches the moodiness of the opening cut while quietly sandwiching the more upbeat ones.

Although a few of the tracks take a bit of getting used to especially if you’re not particularly fond of 80s electro pop, both the opening and ending songs shows the musician at his best. The quiet, dark and somewhat ethereal mood these two songs have are worth checking out if you ask me. You can grab the free download over at BandCamp and also check out the band’s other compilations if you like what you hear.