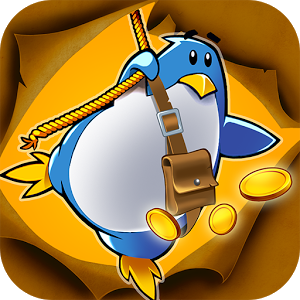 Adventure Beaks from Gamesresort is a free sidescroller game with elements of platform running with item collecting and plenty of adventure. Combined with the pleasing graphics and the sound, this is one of the most engaging games available for the Android and iOS, and it’s a lot of fun.

In Adventure Beaks you have these fat flightless birds belly flopping, swimming and hopping their way from the frozen land of the Antarctic all the way to the jungles. Their mission is to collect some cool outfits, treasure, artifacts and more. The premise sounds like a lot of fun and it is.

Adventure Beaks can be a challenging game, but you get a lot to work with. At the start you have five penguins, and that’s good because there are a dozen levels you have to play through. Each one of these is separated by checkpoints, and it’s one of the best features of the game as the levels become more difficult as you proceed.

The game’s controls are swipe based and while it takes a bit of time to figure out, they are very accurate and you’ll need to learn them if you want your penguins to go over the land, air and sea. All the stages in Adventure Beaks have branching paths with artifacts and treasure chests. The artifacts are especially important since you’ll be needing them to open the other levels.

The treasure chests in Adventure Beaks meanwhile, provide you with power ups, coins, as well as outfits. The outfits are particularly nice since you can customize and mix and match them. Because you start with five penguins, you have plenty to start the hunt, giving you incentive to go on.