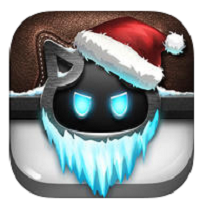 Battle Camp from Penny Pop is a social game with elements of match three puzzle play and RPG. It’s got all the features you’d expect from these games such as transactions, social media interaction, strategy and so on; but it’s way more fun and has more depth in many ways.

Battle Camp starts with a brief tutorial so you know what to do, after which you will need to create characters from among the presets. Then you’ll be in camp and learn how the game works thanks to a penguin who’ll act as your guide. At the start you’ll have a few cuddly monsters, and the goal is to have them challenge other monsters.

Battle Camp relies on an energy system, and the set up is turn based so it’s something you will be familiar with. Each monster attacks by matching at least three of the icons on the board. But rather than getting adjacent icons lined up, they can be matched and moved anywhere.

With this feature you can create several combinations by moving just one of the icons. This may sound confusing, but it’s actually a great feature that allows for some really powerful monster attacks. There’s also a convenient health bar that tells you how well your monsters are doing, and if you get three or more heart icons you can heal them.

To win in Battle Camp, you’ll need more than just monsters, as you must also get energy, monster parts, tokens and more. Best of all, your monsters evolve and they can become more powerful, which makes the game more addictive.