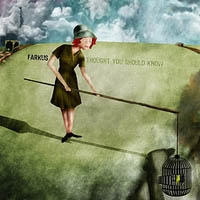 Farkus: Thought You Should Know

Farkus is a Chicago based fresh rock band who’s debut album “Thought You Should Know” is getting rave reviews and already placing on internet top albums lists. After listening to the album, Wildy’s World wrote an exceptionally positive review saying that “Thought You Should Know” draws on the melodic traditions of The Beatles, great pop hooks and an indie/post-punk spirit that is at the heart of modern Rock N Roll. (…) Farkus shows two very distinct sides on Thought You Should Know. One is the compelling, thoughtful singer-songwriter; the other is the big, arena rock star band with impressive hooks, strong melodies and a sense of pop timing. Both hearts beat within this band, and as they are they will do very well for themselves.

How Did They Meet?

Drummer Dave Durdov entered a Champaign Illinois college party as a stranger when he happened upon Tony Maguire and Brian Gillham jamming together on acoustic guitars. Intrigued by the unfamiliar songs the duo was performing, Durdov had to inquire who they were “covering”. His question remained unanswered until the three were able to regroup in their hometown of Chicago years later to form the beginnings of Farkus. The final piece of the puzzle, Kevin Coyne, was no stranger to the band. However, Maguire and Gillham were unaware that since they last saw Coyne in high school he was busy honing his musical talent by touring Europe as a bass player.

What Are They Up To Now?
Since then Farkus has gathered a substantial catalogue of recorded material, got itself a nice looking website and released their first record “Thought You Should Know” which includes “Windsor Noose’, the very first Farkus song Durdov heard that night in Champaign.
Davey Rieley produced, engineered and mixed Farkus’ creation and Richard Dodd mastered it to perfection.

The band decided to release this album under the Creative Commons Attribution 3.0 United States License so you are free to share & remix their work, as long as you provide the appropriate attribution. You can support the band by purchasing their album at Amazon, iTunes or wherever MP3 downloads are sold. Read the newest review at Muzik Reviews.

If you like Farkus’ music, make sure to digg up the post to get them some publicity.
Your comments are welcomed too, so don’t be shy – tell us what you think!