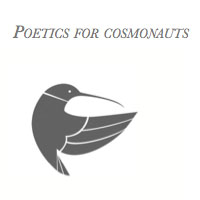 “Poetics for Cosmonauts” by Henry Pierrot is a short little book of poems inspired by the soon-to-be shot full feature crowd-sourced movie licensed under Creative Commons entitled “The Cosmonaut”.

Released in conjunction with the movie (a hard copy is being sold to help found it!) it complements is it extremely well giving you the fell and a little taste for the main release.

“The Cosmonaut” is the first large-scale fully crowd-sourced sci-fi feature about a Russian Cosmonaut being lost in space and on the Earth. Being produced by The Riot Cinema Collective, the film and most of the production elements will the licensed under Creative Commons and distributed simultaneously online, DVD, TV & cinema.

This little book of poems was written by Henry Pierrot and translated to English by Gabriela Lendo & Daniel Castro with an amazing prologue by Alberto Olmos. Here is an excerpt:

“Poetics for Cosmonauts” is definitely a reading worth your time and maybe even some cash for the printed version.

You can find out more about the project by following the links below. There is plenty of material to downlaod & get sucked into the storyline: the script (they even have a light versions without spoilers), the aesthetic dossier, press kit, financial planner, even t-shirt designs!
Here is the trailer to start you off. Enjoy!