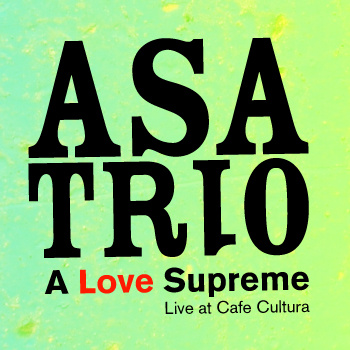 Feel like shutting off your cell phone, computer and getting lost in some quality jazz sounds; well than here is your chance. A Love Supreme will bring you just that, a combination of piercing guitars, lush drums, and mood-setting organs all packaged with the stunningly gorgeous compositions.

The album might include only four tracks, however, as each of them is spanning anything between six to nine minutes, ASA Trio made sure to leave you with well enough sounds to enjoy.

A Love Supreme was recorded on October 29, 2009 at Cafe Cultura, Reykjavik, Iceland as a part of the Múlinn concert series; and as a live recording it will surely make you think that you are in the same room as the band, surrounded by fabulous wandering sounds. With a chilling drums slowly taking us deeper into the first track on the record, the Acknowledgment soon stumbles upon a somewhat more lively turn right after it’s one minute mark. Here it is the guitar that picks up to entangle you with the melodies all while the soft drums keep on paving the way in the background. This soothing cut will surely put you in the right mood for some of the jazzy goodness; which comes like a thunder in the form of more strong and eclectic Resolution, and Psalm filled with some iconic organ sounds.

It may seem that ASA Trio came together by mere chance, or faith! And it all began when in 2005 the Reykjavik Jazz Festival saw a last minute cancellation. This is exactly when Andres Thor, the guitarist, stepped in to save the day after he was asked to put together a group to fill in the now missing spot.
From there on something clicked, the spark flew and the band was born. And although in the beginning the boys focused solely on compositions by Thelonious Monk, as the time passed the repertoire also grew to include some of the more unlikely artists such as Tony Williams, Red Hot Chili Peppers, and Fiona Apple, among with their own original compositions that is.

The album is offered as a free download under the Creative Commons License.
Want more? Head straight to the ASA Trio’s bandcamp page for more free surprises.