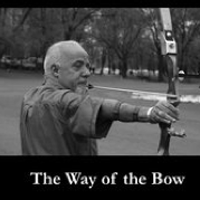 Paulo Coelho: The Way of the Bow

From the best selling author Paulo Coelho, the man behind the The Alchemist and Veronika Decides to Die comes yet another soulful story published last 2008.

The Way of the Bow, centers around the story of Tetsuya, the best archer in the country, who conveys his teachings to a boy in his village.

Unlike his other works, Coelho’s writing here was surprisingly Japanese in style – similar to a master giving advice to an apprentice. He showed a deep knowledge about archery (including its technical aspect), and used it as a metaphor to convey teachings on work, overcoming difficulties, steadfastness and courage to take risky decisions.

The story might be brief, it will only take you about an hour and a half to go through it cover to cover, but the teachings it instills can be kept for a lifetime. The Way of The Bow is essentially a small book filled with great nuggets of wisdom.

Paulo Coehlo was born in 1947 in the city of Rio de Janeiro; after quite a stormy teenage years and life full of adventures that would soon shape him into the world’s best selling author, Coelho became also known to be an advocate of spreading his books through peer-to-peer file sharing networks such as The Pirate Bay.

Pirates of the world, unite and pirate everything I’ve ever written!, said Coehlo in a recent blog post where he revealed his thoughts about the Stop Online Piracy Act (S.O.P.A.), clearly stating his opposition and noting how the bill might disrupt the internet, and in turn, the whole planet.

The writer also pointed out a different view on piracy — being a medium for introducing a single work to an audience of a wider scope. Coehlo admitted that he also posted a pirated edition of The Alchemist on his website, which in turn helped the novel’s staggering sales. Read the whole post here.

“Pirating can act as an introduction to an artist’s work. If you like his or her idea, then you will want to have it in your house; a good idea doesn’t need protection…The rest is either greed or ignorance.”

And now after being in direct contact with Coelho himself (the great man whose work has been translated into more than 70 languages winning the Guinness World Record for most translated book by a living author), FrostClick and FrostWire have the pleasure to present to you one amazing read! So what are you waiting for? Hit click, enjoy and spread the love! Paulo featured on the FrostWire for Desktop home screen

Paulo featured on the FrostWire for Android