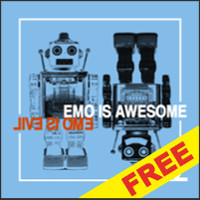 Deep Elm is a great indie record label and with over 120 releases in it’s catalog it is quickly securing a reputation of the most reliable source of quality independent recordings. From time to time the label releases free samples of their music available for download for 30 days at a time. “EMO IS AWESOME / EMO IS EVIL” is the label’s newest sampler of some of the hardcore indie rising stars. If you like hard-rock, this compilation might be a great way for you to discover some new artists. If you are not a big fan, don’t be afraid to try something new – the album has it’s lighter moments and the lyrics might surprise you very pleasantly (+ it is free after all :P).

Our EMO IS AWESOME / EMO IS EVIL 2 sampler is packed with 15 songs (56 minutes) from all of our new releases PLUS some Deep Elm classics as well. This is version 2 of our Hottest Selling Sampler Ever and it again delivers the intense combination of emotional songwriting, heartfelt lyrics and moving live performance often referred to as “emo.” Whether you think emo is awesome or evil, you can’t deny it’s all bloody good.

“Fifteen songs from the rising stars of the melodic hardcore underground, the best are represented on Emo Is Awesome / Emo Is Evil. Intelligent, poetic noise that comes from the anger and energy of punk rock. You feel the drums and banshee guitars kicking out in adrenalin overdrive. Deep Elm has reason to be proud of its commitment to this genre because the strain they offer is a purer, more virulent, more dangerous strain than any of the other slow clowns being labeled emo.”

“It’s a wonder why anyone else bothers with compilations when Deep Elm are the masters of the mix tape. There’s certainly nothing to complain about on Emo Is Awesome / Emo Is Evil. Powerful energy fueled by beaten guitars and pure rock fury. For yet another stunner of a compilation, look no further…”