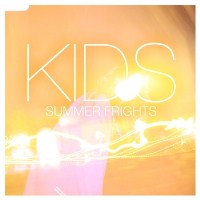 Assuming that most readers here are music lovers, then at some point you must have started, dabbled or thought about starting your own band. Some make it, a few start and soon after lose interest, while others actually become good at what they do and stick around a bit.

Summer Frights from KIDS is one band that has stuck around. All of the members are under 20 and even though there’s still room for growth; there’s already plenty potential brewing from their pot.

The album contains fresh and unpretentious original tracks along with one very lovely cover of the Ronettes track, Be My Baby.

These San Diego natives have a long way to go in front of them but their debut is proving that it’s still possible to create a fresh sounding record even while playing straight out of the garage. Their sound mixes a bit of 60s Do0-wop, punk, pop girl band and of course a hint of rock.

Starting with Hidden Hills, you get a nice indie rock vibe with a sweet 90s girl band touch. It’s followed by Blind Eel, which include a more punk/garage sound combined with a hint of sunshiney Vampire Weekend feel to it. The song also showcases the band’s talent in songwriting; as they create cleverly strung together words that narrate sweet stories.

Meanwhile, title track, Summer Frights, is a catchy single while Melt and Further, sees the band explore their more rock and roll side. It has that hipster punk air; coupled with fast drumbeats as well as catchy harmonies. Finally, the album is capped off with the true-to-the-original cover of the Ronettes’ Be My Baby.

KIDS. might be a young band (forming just back in 2009) however, this doesn’t mean their inexperience is a downside. In fact, the unpolished home recording adds a touch of sincerity to the album along with honest vocals and angstry/interesting instrument work. It’s a nice EP to check out. Perfect if you need a break from all the overly produced music you hear on the radio. Grab the download. It’s free.

KIDS on BandCamp
KIDS on Facebook
KIDS on Tumblr