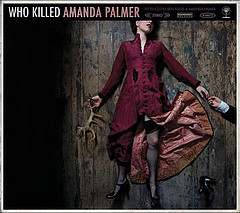 Amanda Palmer is a performer most recognized for being a lead singer, pianist & a songwirter of a cabaret duo The Dresden Dolls. Released in September 2008, “Who Killed Amanda Palmer” is her first solo album. It was produced mainly in Nashville, TN by Ben Folds under the umbrella of Roadrunner Records (which is also the record label for The Dresden Dolls). The title of the album refers to the famous TV series “Twin Peaks” which revolves about the murder of a teenage girl named Laura Palmer.

The album was received quite positively by most of its reviewers, being praised for Palmer’s strengths as a lyricist & pianist. On the other hand, Allmusic gave the album only two out of five stars accusing it of being a compilation of tracks that didn’t make it to the band’s earlier albums. Aside of all the reviews, I like the album because of it’s clean piano sounds and very honest lyrics.

The album received a bit more press exposure than expected, in part thanks to two little controversies. The first happened when Palmer relieved on her blog that the record label asked her to reedit parts of her music video because her belly was too fat (which of curse, it wasn’t). Palmer’s fans immediately started posting pictures of their bellies in support.

Another controversy came after “all” British broadcasters refused to give airtime to Palmer’s song “Oasis”.

The semi-autobiographical lyrics tell a story of a rape & abortion from a point of view of a teenage girl, who doesn’t realize the magnitude of her trauma thanks to her blind absorption with the British band “Oasis”. The British media accused Palmer of “making light of rape, religion, and abortion” to which she replied in her blog and the interview with a Guardian reporter, Emine Saner.

“I had an abortion when I was 17. I was with my boyfriend, who I had been with for three years and was totally in love with. It actually wasn’t very traumatic but, of course, it left a mark on me. I have been date-raped. But, you know, date rape is loose. I have, when I was a lot younger, found myself in a situation where I had not consented. And I also found myself wondering, ‘Was it my fault? Should I not have been drunk?’ I’d like to think that the minute you are able to joke about the darkest situations in your life is the minute you have wrestled power and control back from that situation. But [this song is] not about those things being funny – it is a character sketch of a girl who is so out to lunch that she’s in total denial of the gravity of her situation. What I see are kids not being taken seriously, not taking themselves seriously and playing life like it’s a video game. So you have to be able to joke about it, address it, approach it from lots of different angles. If it sparks a discussion, why isn’t that good?”

Let us know what you think & leave a comment below. If you like the album make sure to follow the links below to find out more about Amanda Palmer, check out the concert dates and purchase her music.