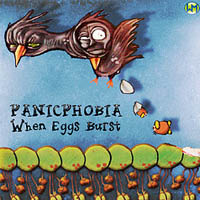 Panicphobia a rock-quintett from Aarhus, Denmark. They play what they like to call playfull rock, which is a mix between progressive and alternative. The music has not been “written” in the more traditional sense, but is sort of collectively composed. Emerging musical ideas have been added a healthy mix of theory combined with observations and intuition along with musical experiments or improvisations.

Panicphobia is:
– Five musicians – one band!
– a mix between musicians and their styles, likes and dislikes!
– a way of playing music without having to wait your turn – music where every second counts.
– a way of collectively composing and arranging music.
– riffs, guitar-fiddling, creepy baslines, vocal mumbojumbo – musical dialog!
– musicians playing it unsafe!
– a group of musicians twisting and turning raw musical material untill it’s fun for everyone – including the listener.
– different!

Panicphobia is not:
– another band just waiting for another chance to repeat the chorus.
– a group of musicians where everyone is waiting for their turn to “speak”.
– just a lead singer and a band!
– a band trying to catch a modern vibe.
– a specific sound.

Panicphobia’s debut album “Handle With Care – Might Panic” was released by WM Recordings in 2008. The album is available from all major download stores and from CD Baby.

This mini-album is covered under a Creative Commons License.