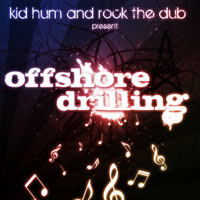 A great album/compilation has recently popped in on our radar. “Offshore Drilling” came together as a joint project between Khal from Rock The Dub and a Colorado hip-hop producer Kid Hum. It started with Khal sending some of Kid Hum’s beats from his “Fossil Fuels” project to few MCs back at the end of 2008. Soon artists like Junclassic, Pugs Atomz, Whygee and Sunkenstate jumped on board the the compilation started coming together. The final product compiled together by Kid Hum features 13 tracks (and two bonus ones) and more than 13 artists in both the radio and the uncensored versions.

The name Offshore Drilling works in a few ways, says Khal. I came up with it on a walk home. It has obvious connotations to the idea of “fossil fuels”. I know its been a buzz term, especially during this most recent election in America. While its more negative in that light, I just like the idea that the original content is the fossil fuel, and we went offshore, looking for more black gold, especially since the artists on this hail from NY, North Carolina, Texas, Illinois and many other spots – hell, Kid Hum is Hawaii by way of Colorado!

Khal admits himself that he had little to do with the music on this album. He was the middle man, the one choosing MCs, contacting everybody and making sure quality tracks are delivered.

I think we lucked out with the range of MCs who tackled these tracks: PreZZure was someone I got acquainted with during the process of finding MCs, and he knocked out his track and sent me a copy like six hours after we spoke. Kid Hum’s previous work with Why & Sunkenstate made their contributions no brainers. Cy Yung, who I found out had been in communication with Hum based off the beats I sent him a while ago, contributed two cuts, as did Junclassic (who is also working on some other projects with Hum). Kid Hum brought on Braille, and I got some other MCs to get down, including Joulz Il and Sky 7th. The banger of a cover was done by my long-time friend Uriela, and that’s about it.

Quality Hip-Hop from artists who might not be on the top of the charts, or even on the top of your blogs, but people who should be considered problems and be a part of the developing phase known as the evolution of the game.