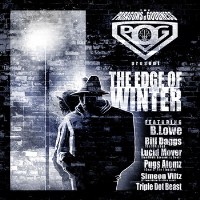 The Paragons Of Goodness: The Edge Of Winter

What happens when two talented individuals join forces to create a record? You get one interesting and special R&B hip hop compilation that’s definitely worth your while.

The Paragons of Goodness is a two man crew made up of songwriter/producer/illustrator and vocalist Greg Blackman as well as engineer/producer/musician and owner of Long Track Studios, Nathan Wacey.

Together they released this 18-track compilation that’s filled with a host of lovely music. From smooth R&B to soulful hip hop and rap, the record has plenty of surprises for its listeners.

After the short intro, the boys proceed to showcase their skills in the opening track, Suffering. This one’s a laid-back R&B cut that has some soulful jazz beats right near the end. The boys get a helping hand from Pugs Atomz and Simeon Viltz on this one.

Other tracks that are worth listening include the 5 Golden Rules of Commercial Hip Hop, which is a quirky 3-minute single that mixes spoken word along with a nice uptempo beat. Cold Street Lights is another track to watch out for. It’s a bit darker and more hip hop than R&B. Featuring Lucid Mover on the mic, the cut is slightly trippy in places and conjures up images of dark street corners and shady alleys.

Meanwhile, everything is capped off by title track, The Edge of Winter. Combining an ethereal mix of beats, samples and vocals; the song finishes the record on a high note. The song pretty much encapsulates the genius between the duo and how they combine their respective talents into creating a polished record like this one.

Why not take a listen? This should be a good one. The album is available for free download over at the group’s BandCamp page.