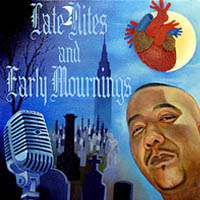 Junclassic is a rapper/music producer from SouthSide Jamaica, Queens. This is his third compilation and he’s decided to give it away free in collaboration with Backpackers Anonymous, a hip-hop collective “aimed at returning hip-hop to it’s golden era.” Junclassic’s previous album, “Overqualified” was reviewed by many prestigious music publications (Entertainment Weekly, HipHop Connection, HipHopDX, etc) and received praise for its originality.

Here is a music video of a song from “Overqualified” entitled “God Is Listening”:

Why do a free EP?

Cause people don’t know who I am!!!!! Hahahaha…. seriously tho. Not only that, but in these economic times, people are much more likely to check something free than something that costs. Shit, I know I do.

And I’m hoping that by giving the people some good music for free, I will create a fanbase and increase potential customers for my follow up EP, Imaginary Enemies, which will be pressed and numbered in a limited edition collector’s item series.

All tracks recorded at The Vault in St. Albans, Queens, vocals recorded by Big Beazt and Blakasper, xixed by J Slikk, artwork by Alan Coogan-Prieto Killin.