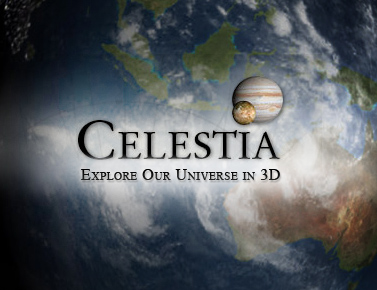 Don’t you wish you can just fly outside of Earth and into the universe? Explore the other planets and the nearby stars, and maybe even catch a glimpse of a comet or an asteroid? It might not be possible now to tour the Solar System or the universe (unless you are a billionaire!), but you can do this in the comforts of your home right in front of your own computer with Celestia.
Celestia is an open-source space simulation software that lets you explore the universe in 3-dimension – stars, galaxies, planets, asteroids and a whole lot more! And the best part? It runs on Windows, Linux and Max OS X.

Celestia lets you travel not only within Earth or the Solar System, but also beyond the Milky Way. It lets you explore the universe in real-time. And since the movement is seamless, you can simply zoom in to any heavenly body, and literally just point, click and visit whatever you want in the universe. And since Celestia is constantly being updated by programmers and software developers, it is expandable. New add-ons can be installed on top of thousands of stars, comets, asteroids, spacecrafts and meteors.

In Celestia, you can also follow a certain planet or any heavenly body, or view their respective orbits such as the picture above. It also features its virtual texture for high resolution mapping of planets’ surfaces, like the picture below which shows the space shuttle Discovery above the state of Florida. You can see how detailed the textures are, and the space shuttle itself looks very close to reality.

Celestia features dozens of add-ons, and they can all be found in the Celestia Motherlode. It is the official repository for over 10GBs of Celestia add-ons, and also instructions on how you use them. There are real add-ons such as new spacecrafts, and also fictional add-ons like Star Wars.

Can you imagine hooking up your PC to an LCD projector? You’d literally be exploring the universe in your bedroom. It’s even way better than learning it by books in high school class.